The Excrawlers — is a beautifully animated roguelite action RPG in which you use a sword and a bow to make your way through dungeons filled with monsters and madness. You control a lone female warrior who goes through procedurally generated forests and dungeons. In the beginning you have very little strength, but as you progress you increase the level, equip powerful runes and at the end of each area you can discover a new skill. In the current version of The Excrawlers you will have to go through a forest biome consisting of six separate areas and a boss fight. You can move, swing a sword and use a bow, and to survive first, anyway, you have to master all three skills.

Fighting is fun, pixel art is great and you can discover a number of abilities that will help you in battle. However, the current version of the game has some problems it is very repetitive, the dialogues are poorly written, and the balance is a big problem. Because the enemies do not change from the beginning to the end of this version, and you are constantly collecting improvements, this leads to the fact that the game becomes from ridiculously difficult to ridiculously easy. You start playing by showing your skill, but as you level up you can just lazily push the buttons and succeed. Hopefully, the developers will find a way to fix this, because somewhere in the middle there is a golden mean, where the game is a lot of fun. 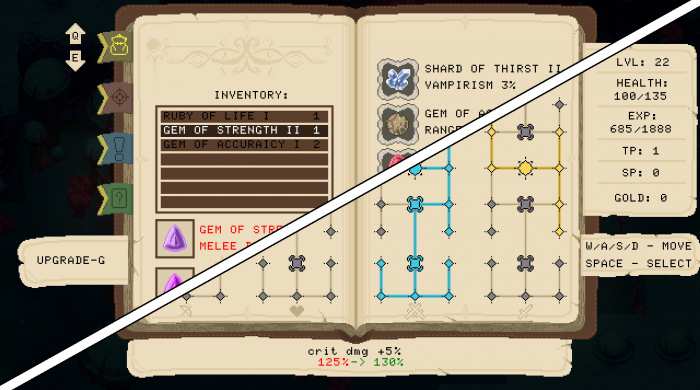