Sniper Elite V2 Remastered — reissue of one of the best sniper simulators, first-person shooter in which you have to go during the Second World War and complete one of the most dangerous tasks. And again in the story you will play an elite sniper named Carl Fairburn. But now you are waiting for a special task — you need to get to Berlin, where the last German defense is located.

And before the arrival of the allied forces, find and recruit nuclear scientists involved in the development of new nuclear weapons. Moreover, you need to steal all the documentation related to these developments. In general, you will find another difficult task. Firstly, now you will work in the urban environment, which is quite difficult for a sniper, and secondly, you are waiting for more intelligent opponents in comparison with the previous parts.

The gameplay in Sniper Elite V2 Remastered has practically not changed and remains the same. You will track the victims, eliminate opponents by all available means, destroy them from long distances, and at the same time enjoy in a slow time mode a detailed demonstration of the flight of a bullet. At your disposal there will again be a wide arsenal of weapons, various gadgets of that time, equipment and not only.

But the most important thing is that this version includes all the downloadable official content, including rare guns and cool sniper rifles. Plus, in this version you will find updated graphics. Textures, environments, characters and their faces, weapons and special effects — now everything looks much better.

And in addition to the graphics, you will also have access to a special photo mode in which you can view the entire battle frame by frame and even edit the frames in order to create really cool photos. 1. The first thing we do is download the game’s installation files.
2. Mount or burn the ISO image in the disk emulator (UltraISO program).
3. During the installation, we specify the location on the disk where we want to install it.
4. Wait until the installation process is complete, a shortcut will appear on the desktop.
5. Download & install Update 1 / 3, in game folder.
6. Copy the contents of the folder «CODEX» in the folder with the game.
7. Start the game.
Download update only: Sniper.Elite.V2.Remastered.Update.3-CODEX [ 3.90 GB ]
Download update only: Sniper.Elite.V2.Remastered.Update.1-CODEX [ 1.6 GB ]

* On the way X: \ Sniper Elite V2 Remastered in the steam_emu.ini file, change the line Language = english to Language = your language 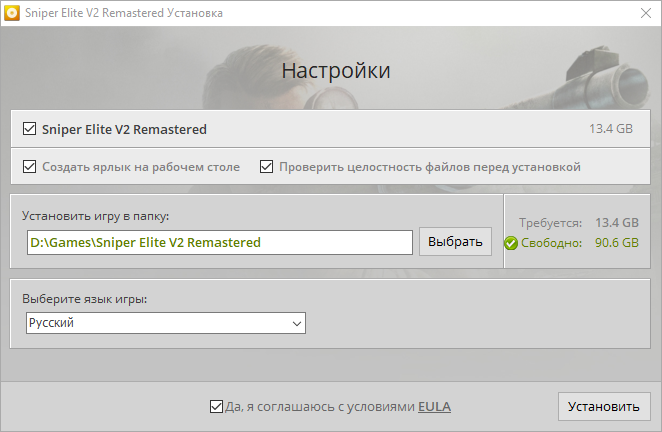